By the SMU Social Media Team

Health-conscious foodies will be able to relate to the impetus for Alan Phua’s first business. In 2010, when he was a final-year Business Management student at Singapore Management University, Alan launched Soyato, a low-calorie ice-cream brand he co-founded with then-National University of Singapore Food Science student Verleen Goh. The two entrepreneurs got married in 2018. 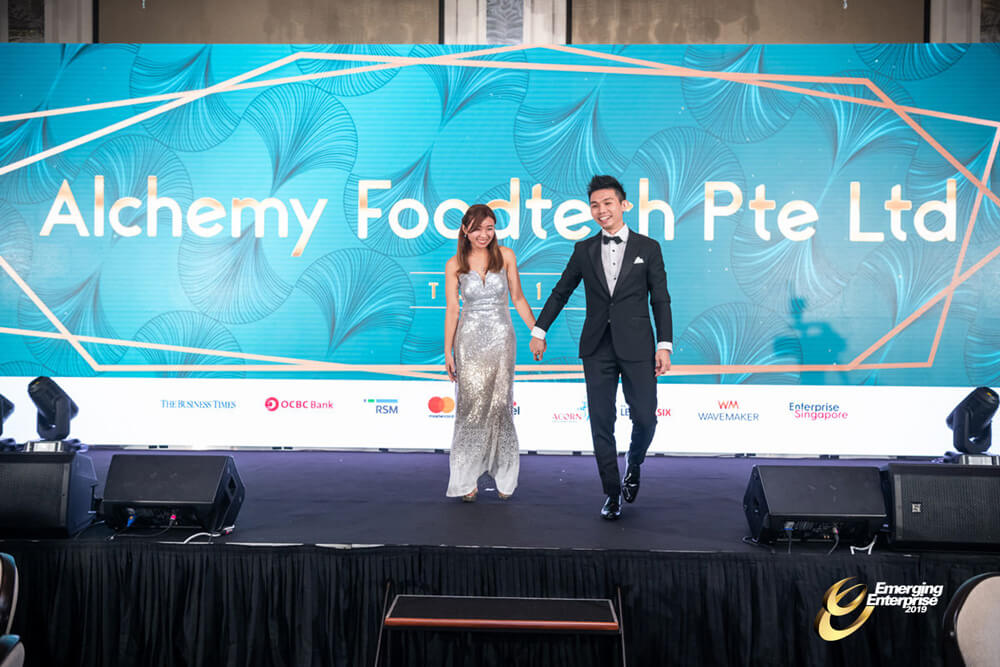 Alan and his wife, Verleen Goh, at the 2019 Emerging Enterprise Award Gala Night

“We liked eating ice-cream and desserts, but we didn’t want to grow fat, so we used food science to look into fat replacement,” says Alan with a laugh. The couple used soy milk as the base for their guilt-free ice-cream, and grew Soyato into a successful brand before exiting the business in 2017 to focus on their new venture—Alchemy Foodtech.

This foodtech company has developed a blend of natural plant fibre active ingredients that can be added to bread, noodles, buns and rice, thus increasing the fibre content and lowering the glycaemic index (GI) of these widely consumed refined carbohydrates, without changing its taste. Foods with high GI cause spikes in blood glucose levels, and this can lead to diabetes when one’s body develops a resistance to insulin, the hormone that regulates the metabolism of glucose.

Alan had been drawn to the idea of working on foodtech solutions that tackled diabetes because the disease is a huge problem for the world’s rapidly ageing populations. Several of his relatives also shared a history of diabetes, “so there was a strong personal motivation there as well”, he says.

Running Soyato had given him a better understanding of consumers and manufacturers, which proved invaluable as he formulated a strategy for Alchemy Foodtech. For starters, “we did not want to compromise on taste”, he explains. “When we were working on different prototypes for Soyato, we realised that people tended to want a good balance between low-calorie count and good flavour. What we learnt is that while consumers can be health-conscious, taste is always king.”

That’s why Alchemy Foodtech’s plant fibre blend is designed to not alter the taste of the carbohydrate products they are added to. The decision to partner with existing food brands—current partners include sandwich loaf bakery Gardenia—was also driven by a desire to lean into consumer preferences.

“Another way to do this might have been to launch our own finished products,” Alan acknowledges. “But people are very loyal to the brand of rice that they like, for example, because they want that particular texture and aroma. That’s why, even though the government has spent years and millions of dollars on campaigns that encourage people to eat more whole grains rather than refined carbohydrates, the adoption levels are still very low because the taste that the majority prefers is just not there. With our approach, consumers don’t have to give up their favourite foods. ‘Make Tasty Foods Healthier’ is our tagline and belief.”

Alchemy Foodtech’s business model also means that brands don’t have to change their manufacturing processes in order to produce healthier products—another insight which Alan had gleaned from his Soyato days. “An existing manufacturing set-up has a lot of sunk costs, and if you need to introduce a whole suite of changes, that can easily meet resistance or inertia,” he says. Another plus of easy integration into existing production processes: no new equipment means consumers don’t have to shoulder added expenses in the form of far higher prices.

Another thing he learnt from his Soyato experience was the importance of timing. “When we were working on ice-cream, digital disruption and tech platforms were getting most of the attention,” Alan recalls. Mindful of the way larger trends can impact the degree of traction a startup receives, he did his homework when preparing to launch Alchemy. “We found out that the Singapore government was preparing to launch a campaign against diabetes, and the World Health Organization was going to make beating diabetes the theme of World Health Day in 2016. So we knew that this problem was about to become very relevant.”

In fact, always staying attuned to the big picture is something that he learnt in SMU. “My biggest takeaway from my SMU years was the motto to begin with the end in mind,” says Alan. “We were always encouraged to envision the future, and apply critical thinking to any problems we were trying to solve.” As a member of SMU Bizcom, the business development arm of the SMU Students’ Association, he also had the chance to interact with different companies, and understand their perspectives better. 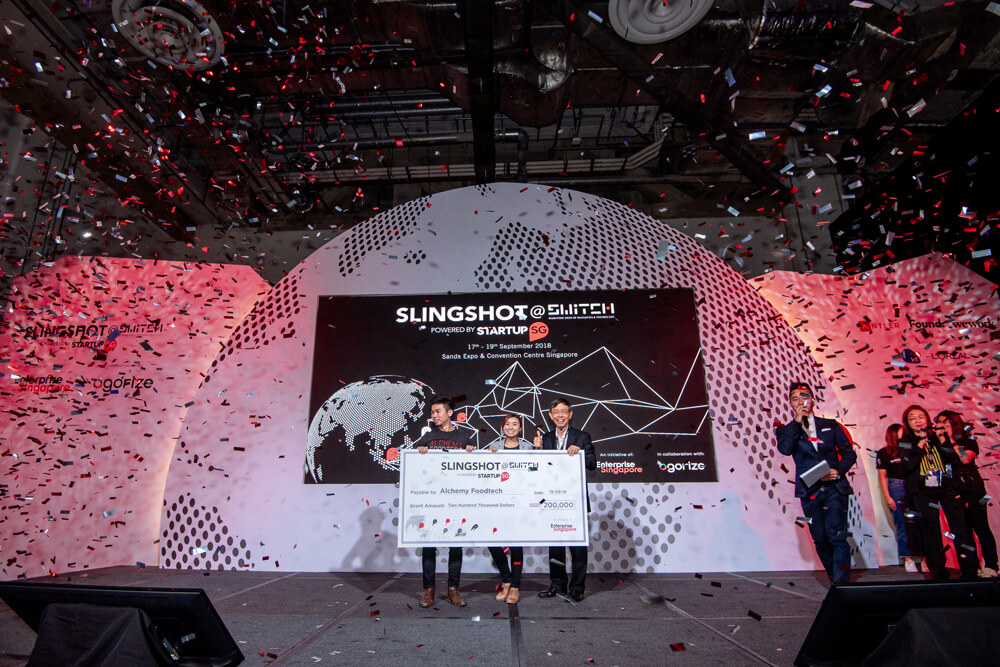 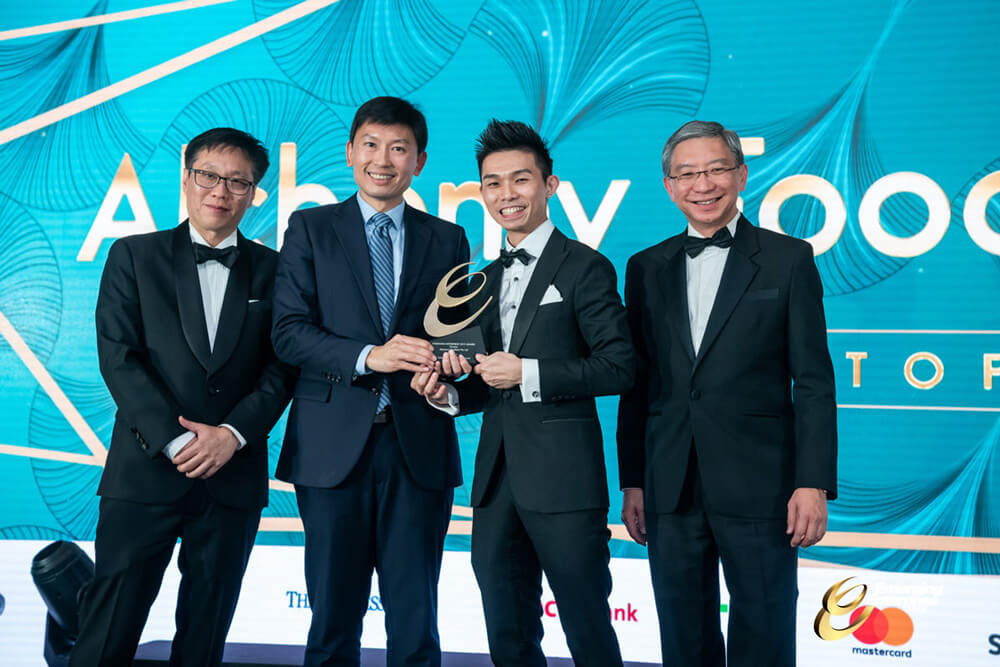 Alan received the Emerging Enterprise Award for Alchemy in 2019

Having won several prestigious research grants and secured seven-digit investment funding in 2018, Alchemy is gearing up for a busy 2020. Its key product gets the new name of Alchemy FibreTM this year, and Alan is aiming to raise consumer awareness about its benefits. “We are primarily a B2B2C company, and for this collaboration model to work, we have to communicate with the general public about what our product means,” he believes. With the help of investors, he’s also hoping to make inroads into Southeast Asia and China.

More recently, developments in the COVID-19 situation has seen an increase in individuals choosing to prepare their own homecooked meals. Recognising this shift in food consumption patterns, which is expected to stay even post circuit breaker, Alchemy will also be launching a B2C-targeted Alchemy Fibre™ for rice, which consumers can add into their rice cookers. “We are always anticipating and understanding changes in consumer behaviours to better serve their needs. With this new product, they can increase their immunity and maintain healthier blood sugar levels,” Alan shared.

His advice to budding entrepreneurs: “Work on big problems. We have been able to recruit great people to join us on our journey because they want to help solve big problems.” Indeed, for him and his team, fighting diabetes is just the beginning. Says Alan: “Ageing populations face plenty of other problems. In the future, we hope to work on new product lines that address different health issues.”